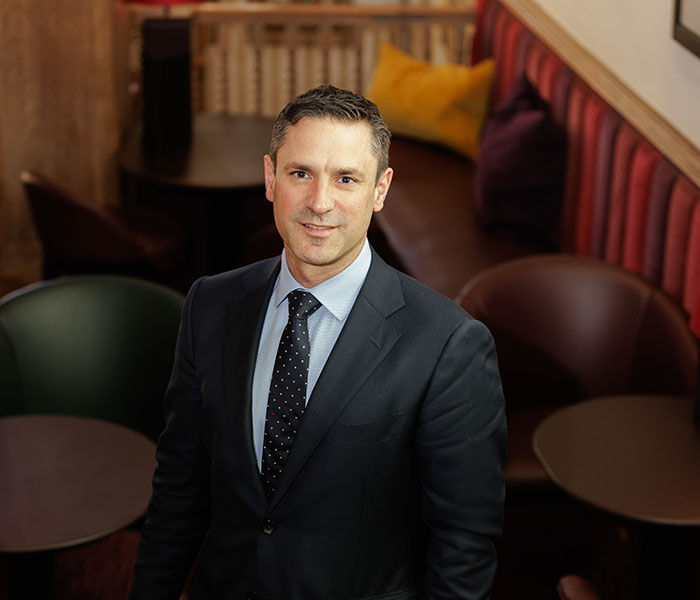 When Swiss restaurateur Anton Mosimann OBE announced he was stepping back from his work at Mosimann’s Dining Club it made big headlines, but it’s business as usual when I arrive – the chef’s two sons have been working with him for more than 15 years and continue the tradition of excellence. 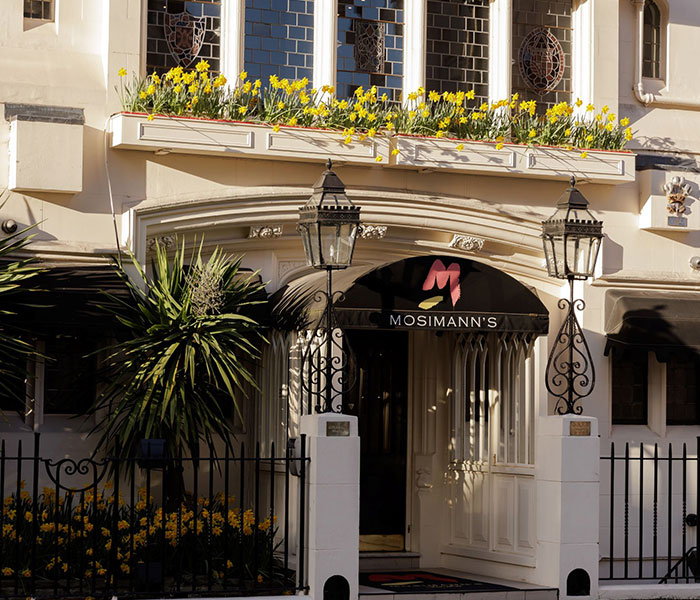 The transition appears seamless. There’s a warm ambience in the galleried bar and dining room which are decked with flamboyant, yet tasteful, floral displays and the menu continues to be ‘all about taste’, rotating with the seasons.

In the kitchen, it’s an oasis of calm with Head Chef Adrian Brunner, also from Switzerland, preparing lunch alongside his seven chefs. There are no flaming hobs, no shouting and, impressively, nothing goes to waste.

“Our aim is for zero waste in the kitchen,” managing director Mark Mosimann tells me. “We keep a couple of small boxes on the worktop and all peelings and scraps are used to make stock.”

The kitchen is kept as cool as possible through using induction hobs. Mosimann’s was one of the first top London restaurants to change from gas and Mark explained: “A hot kitchen is not comfortable and neither do we entertain raised voices, just a smooth and communicative working environment.

“In fact, Angélus, our chef’s table dining room, has a window that looks straight into the kitchen so guests can enjoy watching meals being prepared.”

‘We grew up with it’

Mark and his brother Philipp never really had the usual family holidays, instead they were taken to cities such as Paris and New York so their father could experience the best hotels and restaurants.

Mark said: “There is only 20 months between us, so at the age of four and five, Philipp and I were the best pair of food critics!

“We grew up with it and have both worked from the ground up, training in every aspect of hospitality around the world. We also ‘get stuck in’ where we need to – if carrots need peeling or pots need washing, we roll up our sleeves.

“Our working style is to be fair and diplomatic while ensuring standards are never compromised; we find successful management requires 80 percent planning and organisation and 20 percent delivery.

I tend to look after the private dining club, the UK partnerships and the operational side, while Philipp manages the international events and partnerships. We balance each other out and talk shop all the time, even at home.”

Mark says he expects commitment, passion and a smile from his team because he can teach the rest. He believes that by consistently going above members’ expectations and understanding their needs – such as preferring to be finished and out by 9.30pm – people want to come back.

Anton Mosimann established the restaurant in 1988, falling in love with the former Grade II listed church when it was The Belfry – a private club where Prince Philip held his stag night.

The pretty 19th century property, in West Halkin Street, London, has a central, galleried bar with a downstairs members-only dining room as well as many private dining rooms. Mark said: “My father worked at The Dorchester for 30 years, the youngest chef to gain two Michelin stars, but when there was going to be a major refurbishment of the hotel he started thinking about a premises of his own. He loved the club and went on to buy it.

“He did not have enough money to renovate many of the rooms, so he started partnerships with luxury brands. This continues today with rooms sponsored by Lalique, Mont Blanc, Davidoff, The Lanson Library and Casa Luiza. He was definitely ahead of his time!

“Absolute privacy in these rooms is important so there are buzzers for when service is required, otherwise my team leave the room undisturbed.”

One room that is not sponsored is the Windsor Room. Mosimann’s Royal Warrant, which was awarded in 2000 and renewed every five years, takes pride of place on the walls of memorabilia and cabinets displaying Royal wedding menus. 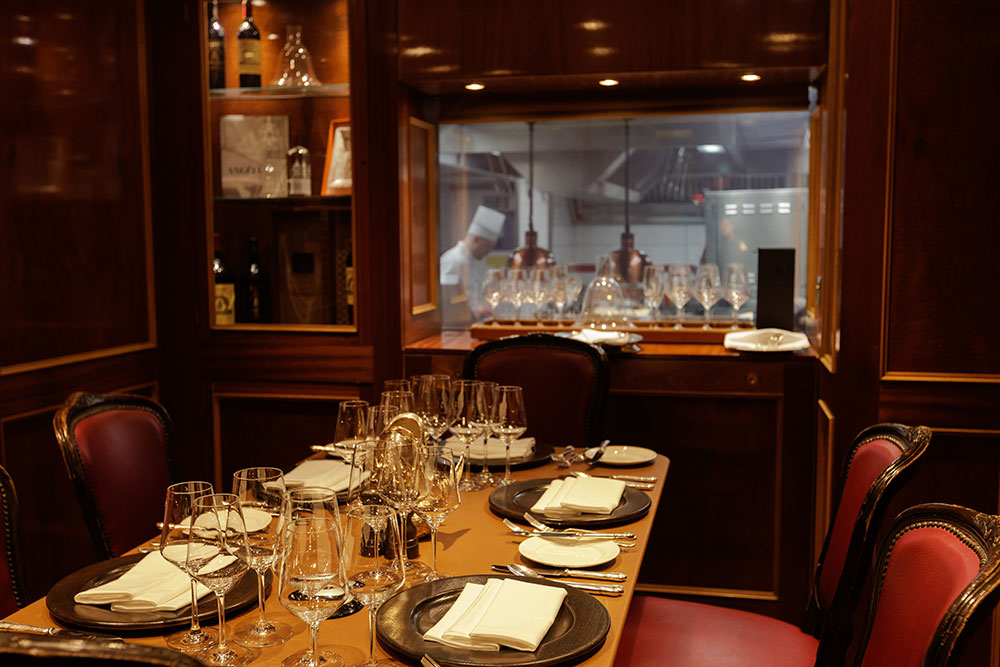 This year, Mosimann’s will be catering for more than 600 at the annual Royal Warrant Holders’ Dinner at the Guildhall, London. Mark said: “We are honoured to have been chosen and we also won the tender for catering at the Royal Windsor Horse Show – that’s around 3,000 guests including 1,000 in The Royal Box and 500 diners in the Platinum Jubilee ‘70 Club’.

“Catherine and William came in for a tasting before their wedding. They made their own decisions about everything from table linen to glassware and china. We sat down for about three hours and the tastings were really relaxed, really nice. Choices were all based on provenance, locality and seasonality and we sourced a lot of veg from the Duchy of Cornwall Estate.” 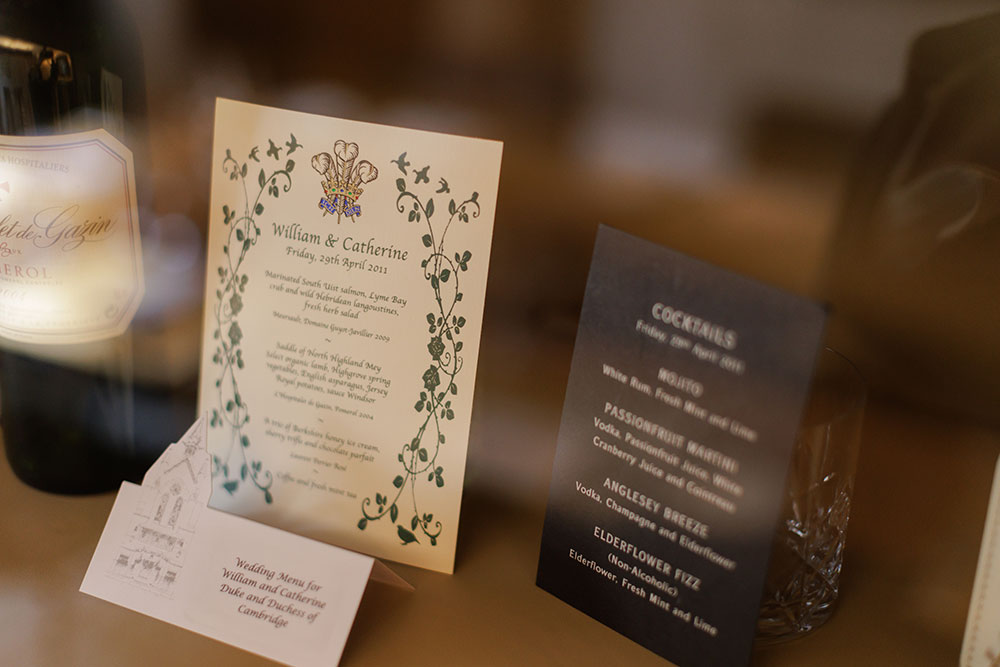 Ingredients used in Mosimann’s menus are almost 100% sourced in the UK, with organic meat from Aubrey Allen, in Warwickshire, and the Rhug Estate, in Denbighshire, while vegetables are sourced from Secretts Farm, in Surrey, and Watts Farms, with land in Kent, Essex and Bedfordshire. Scallops come from Keltic Seafare where the owner hand dives daily so the scallops can arrive on an overnight train from Scotland. Mark said: “It’s all about quality. For us, it’s critical that what we produce is authentic and that the taste and quality shine through. That always comes before profits.”

Mark and Philipp try to avoid working weekends to spend time with their families. During the week Mark often works an hour from home before his son and daughter go off to school, then he’s in the office between 9am and 9.30am. He said: “Sometimes I run to work from my home in south-west London. Philipp and I are both long distance runners and I met my wife, Jenna, while completing a week-long 250km run in Vietnam.

“During the week I attend team and supplier meetings, sort emails, deal with guest liaison and work on planning. I love to chat to our members during lunch and dinner service and I head home around 9pm to 9.30pm.”

Mushroom risotto (using whipped cream), it has been on the menu since the dining club opened.

Bread-and-butter pudding created by Anton for a TV programme when he had to help a family buy and cook a meal for six for £10. Every diner is offered a taster.

A Royal Warrant is granted as a mark of recognition to people or companies who have regularly supplied goods or services to The Queen, The Duke of Edinburgh or The Prince of Wales or their households.

The Queen and The Prince of Wales grant the Royal Warrants and there are more than 800 holders who represent a cross-section of trade and industry.

A Royal Warrant is granted for up to five years, then an application for renewal has to be submitted.

Aston Lark Limited is authorised and regulated by the Financial Conduct Authority, No. 307663, and registered in England and Wales, No. 02831010. Registered office: One Creechurch Place, London, United Kingdom, EC3A 5AF.

Aston Lark Employee Benefits Limited is authorised and regulated by the Financial Conduct Authority, No. 173304, and registered in England and Wales, No. 02792080. Registered office: One Creechurch Place, London, United Kingdom, EC3A 5AF.